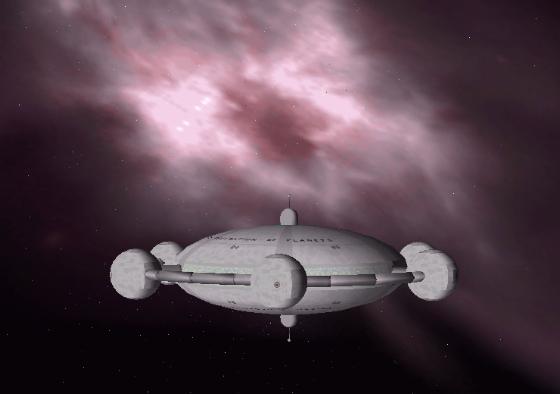 Originally, the starbases of the Federation were to be logically laid out along a grid pattern thoughout explored space, the closest bases to the original members being those with the lowest numbers and progressing outwards steadily. It was subsequently decided that this would be wasteful of resources and unnecessarily restrictive in terms of the future exploration of the galaxy, by putting brand new stations fairly close to perfectly suitable existing member installations.

It was reasoned that the member planets' own supply bases would be thus used for local space, and so the first bases were sited along major avenues of exploration outwith the reach of these installations. Prime locations were in areas where remote colonies needed protection from hostiles, and 'government' support in the form of disaster relief and advanced medical facilities could be given. Later bases would be sited closer to systems whose defensive capabilities needed boosting, but the end result is a haphazard arrangement of starbases, some less that twenty light-years apart, but with designation numbers differing in the hundreds.

Starbase Two was among the original seventeen provided for in the Articles of the Federation as the logistical and support structure for the spacecraft of the fledgling Starfleet. With the existing spacedock facilities of the member and friendly star systems providing infrastructure for Starfleet within the newly-formed Federation itself, it was decided to site the initial starbases in areas were remote colonies needed support. The site chosen for Starbase Two was in the Benecia Sector, some seventy light-years from the Sol system towards the galactic rim, with an eye to providing support to four fledgling colonies in the area as well as a staging post for further exploration missions into uncharted space beyond.

The desired location was a point roughly equidistant from the colonies in the region: Aldebaran Colony, Benecia Colony, Planet Q, and O'Ryan's Planet. However, that location was within the boundary of the Betreka Nebula. It was decided to place the base a parsec from the edges of the nebula, but even in all that space a suitable planet or asteroid could not be found to establish a ground base at the desired location. Therefore a free-floating space station was the only option.

Construction began in July of 2162 for a slated completion date of early 2168 and proceeded on schedule, but immediately began to overrun it's allocated budget. After completion, the project was eightteen months late and 87% over budget, which was a huge shock to the beancounters who crunched the original figures. It was discovered that the projections for such an endeavour were wildly optimistic, but the knowledge gained made it a worthwhile learning experience as subsequent base construction buget overruns were minimal.

The design chosen for the Federation's initial 'official' presence in space was designated the 'Phi-class', based on it's passing resemblence to that letter of the Greek alphabet. It was the largest spacebourne structure yet built by the engineers of any of the Federation races, which contributed to the budget overruns, as did the unusual internal arrangement.

At the time of construction, each of the space-docks could easily hold a half-dozen of the largest member ships and even now can still hold three Class-One vessels. Entry to these space-docks is via large clamshell doors that open outward, to which ships approach in the vertical as opposed to the horizontal axis. Actual docking must be done with the aid of a tractor beam lest the ship arriving inside the dock have the pressure wall rushing to meet them with the rotation of the station.

Starbase Two itself fulfilled the dreams of her planners in no small means. Home to a squadron of three police ships, half-a-dozen frigates and destroyers, as well as a few cruisers – not to mention playing host to Constitution-class starships in more recent times – this base and her vessels kept the peace in the Benecia Sector for over a hundred years. Protecting her four colonies from the depredations of the Klingons and Mirak – ever-ready to raid convoys or isolated planets – as well as any pirates or non-aligned races who decided to try their luck, the starbase itself has had a relatively quiet career, especially as the Federation expanded.

During the precarious early years of the four colonies, Starbase Two was instrumental in halting a famine on O'Ryan's Planet in 2179, using her Daedalus-class cruisers to deliver emergency food supplies and agricultural equpiment.

In 2192, a virulent disease ravaged the population of the Benecia Colony and again, the trusty cruisers of Starbase Two delivered medical supplies and personnel to at first contain then eliminate the disease. The medical staff of Starbase Two worked tirelessly around the clock for two weeks to develop a vaccine, after which work continued for months to develop a cure with every new piece of information gained as the disease progessed.

After a resurgence of contact with the Klingons in 2218 the base once again took on a more defensive posture as the Klingons expanded towards the Federation and border conflicts became more prevalent. Starbase Two was the main rally point for Starfleet border patrols in the Benecia Sector, and helped hold the line until the Klingon border starbases themselves could be built in the 2220s and -30s, such as Starbases 20 in the Gariman Sector, Starbase 22 in the Alora Sector, and Starbase 24 in the Khitomer Sector.

Starbase Two herself came under attack during the Four Years War from a Klingon battle group. In May of 2244, nine Klingon ships broke through Starfleet lines and made to cripple Starfleet's lines of supply with the destruction of the star base. Two squadrons of Raxor-class D-6 battlecruisers accompanied by three Kuve-class F-5 frigates slipped through the Betreka Nebula and pummeled the base for over an hour before fourteen Starfleet vessels sent as reinforcements forced them to retreat.

The final tally for that operation was the destruction of the star base's entire complement of ships as well as heavy damage to sector B4 of the base itself, and the loss of one Newton-class cruiser, three Mann-class cruisers, and three Marklin-class destroyers that were part of the fourteen-ship reinforcement group for the base. Three police ships, two Mikasa-class frigates, four Kovaris-class destroyers, and two Baton Rouge-class cruisers were also lost defending the star base.

The Klingons lost all of their F-5s and three of their D-6s before finally breaking back through to their own lines, with the odds of 3:7 plus a mostly operational starabse convincing them that they'd lost this one.

After this incident – now known as the "Battle of Betreka Nebula" – Starfleet reinforced the base's ship complement as well as beefing up ship strengths at the Klingon border bases. It took nine months to completely repair the damage done to the base and her crew.

Since then, Starbase Two has gone back to her primary role as guardian of the spacelanes, supplying support to the colonies both old and new in the form of disaster relief, defence against pirates, agricultural and medical assistance, and many other ways.

Starbase Two is an example to all of the vital role a starbase plays in the lives of the colonies around it, and continues to be a proud member of the Starfleet Logistical Support Fleet.