Greetings everyone, and welcome to my universe.

In my universe, the Romulans call themselves "Rihannsu" the same way Terrans are also called "Humans". We are more than pseudo-Roman wannabes with massive superiority complexes, and I plan to bring this home to you through my stories, which will hopefully be very good reads to boot.

Within the pages of these stories, you will find adventure, excitement, love, friendship, loyalty, and betrayal – and that's just in 'Kestrel'. All the stories I will present to you here will be slightly modified from their original form as posted on the Taldren Fan Fiction Forums, where all my friends "hang out", as they say on Earth. I will be altering them to remain internally consistent and in keeping with my changing perceptions of the "rules" of Star Trek, rather than just leaving them as is and according to my old perceptions.

Hopefully, this means my stories will improve with time, not to mention seeming more mature and less amateurish as my (also hopefully) increasing writing and story-telling skills will come into play to edit the older works for higher plausibility and consistent technology applications. This latter is directly opposite to the pattern as established on-screen, in which new technology and terminology is retrofitted into past series.

In case you are wondering, yes that is one of my pet peeves. Maybe I'll con tribute to Andy's rant page…

But without further ado, here are my stories. 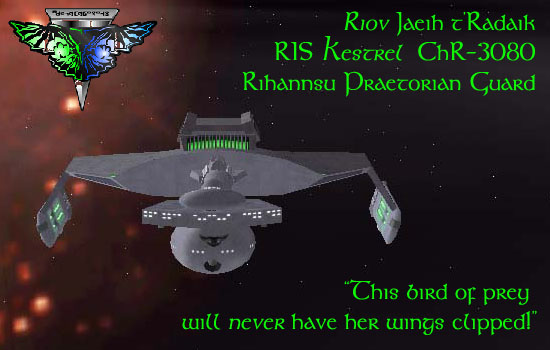 
The Next Generation Era